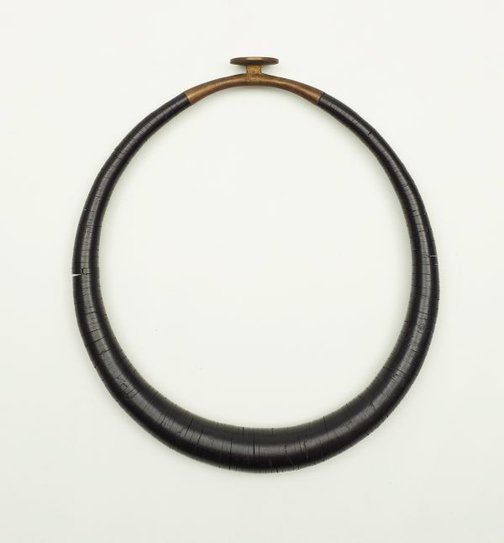 Nias society was once governed by a rigid hierarchical class system consisting of an aristocratic ruling class, commoners and slaves. An array of regalia was used by aristocrats and commoners to mark status, in accordance with wealth and power. Comprised of polished discs of coconut strung onto a metal band, the ‘kalabubu’ was worn exclusively by males and once restricted to those who had attained the status of a warrior or headhunter.

According to some early accounts of Nias culture, it was believed that an uninitiated wearer of a ‘kalabubu’ would be marked and punished by deafness. For the most chiefly aristocratic warriors, the elegant torque would have been covered in gold leaf, the ultimate marker of nobility and a connection with the gods. Following the prohibition of headhunting on Nias by the Dutch in the early twentieth century, the accoutrements of warriors continued to be used for ceremonial performances and honoured as ancestral heirlooms.