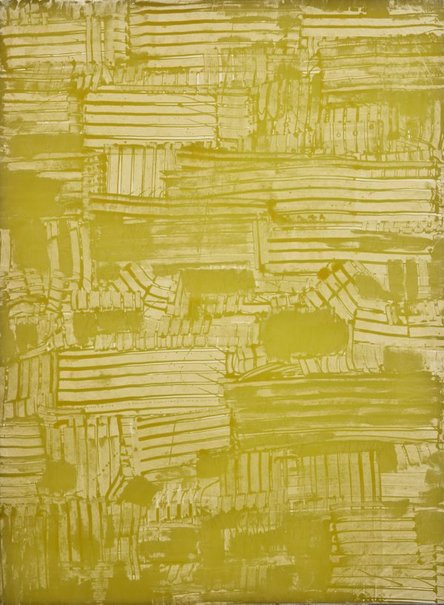 Jean-Pierre Bertrand’s painting ‘Bright yellow green no.1’ is self-reflexive in that its meaning is derived from the way it is made. In this respect it shares an affinity with other abstract paintings that conflate meaning and method: the flung paint and dribbles of Jackson Pollock, the poured colours of Morris Louis or the gestural marks of Dick Watkins, for example, are intrinsic to an appreciation of their work. Even its title is self-referential.

Bertrand has always taken an experimental approach to his art. His decision in 1965 to quit his career as a cameraman at the age of 28 to become an artist is indicative of the risks he is prepared to take. Bertrand has tried many processes and media since then, using film, video, recycled paper, photographic paper, neon, language, honey, salt and lemon, to name some of the ingredients of his (very) mixed media work. He has used a variety of styles but inevitably the properties of his materials are often the subject of his work.

‘Bright yellow green no.1’ is an oil painting yet it is hardly conventional in that the use of the oil medium itself forms the salient characteristic of the work. Bertrand exploits the properties which for many centuries gave oil paint its dominant position in Western art (by combining pigments with linseed oil, Flemish artists in the early 15th century were able to produce softer shades and richer tones than tempera, which soon fell out of favour). Bertrand uses ‘Flemish medium’ (a mixture of linseed oil and gum mastic), which is commonly used when applying glazes, the thin transparent veils of colour favoured by the old masters. Painted directly onto paper, his oily brushstrokes become transparent. The wet paper is then pressed against a sheet of plexiglass. Behind this is a backboard painted ‘bright yellow green’ which provides the colour in this work.

Bertrand’s unusual technique investigates paint by separating pigment, medium and the act of painting by retaining the ‘wet’ character of the brushstrokes. The viewer cannot but be aware of oil paint in terms of its adhesive qualities, viscous properties, degree of transparency, appearance of liquidity and saturated colour. Bertrand’s subject is the very materiality of paint. He also highlights the joy of looking – in teasing out forms, tracing contours, discovering depth and tone in the paint matrix with the most basic means. Bertrand choreographs a variety of accidental effects and delicate painterly passages, using this calculated suite of rational and irrational marks to conjure up canyons and mesas, streets and city buildings and other associations that might be found in the landscape of the imagination. Bertrand’s painterly array is a playground where the eye can wander and find amusement. Tracking the undeniable marks of the artist’s intervention and presence, a timeless humanity is revealed.