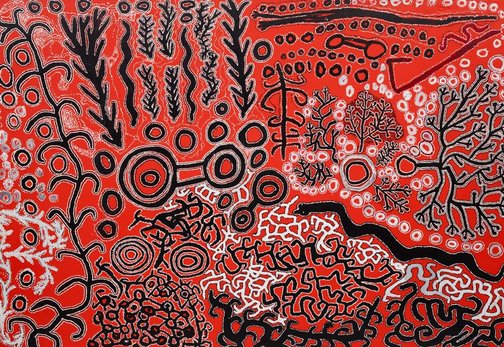 The Spinifex men from the Tjuntjuntjara community are well known for their large scale collaborative works. The began to create these works in 1997 in line with their Native Title documentation process as each artist created paintings of their birth sites and they worked collaboratively to document their innate connection to Spinifex country. The works were formally included in the preamble to their successful land claim which was ratified before the Federal Court in November 2000.

Given the success of their earlier works and the enjoyment derived from working together the men have continued to create collaborative canvases, despite most now having successful solo careers. Their shared histories and overlapping responsibilities to country and associated Tjukurrpa ensure that the process of working on each canvas has a ceremonial atmosphere, as inma (ceremonial singing) is performed and the more complex aspects of culture are discussed. The importance of these events, and the works themselves, is heightened by the fact that they are made on country, during bush trips where particular sites of visited.

‘Watiku Ngura Pulkana’ 2015 was completed by Simon Hogan, Ned Grant, Lawrence Pennington, Lennard Walker, Roy Underwood and Winmati Roberts during a bush trip into the Great Sandy Desert. The individual hand of each artist is clearly evident in the work and in combination these diverse approaches provide a complex image of a vast area of country imbued with several Tjukurrpa and tremendous personal experience. In graphic form the work highlights the songlines that traverse country, the interconnected nature of Tjukurrpa and the manner in which individual responsibilities are linked to form a web of shared ownership of country.

The art centre has provided the following information for this work:
Six senior initiated Spinifex men Simon Hogan, Ned Grant, Lawrence Pennington, Lennard Walker, Roy Underwood and Winmati Roberts have collaborated in this painting to record Tjukurpa that runs through each of their respective birthplaces and areas, which they are responsible for. That these artists have combined on this canvas reflects their relationship to each other and the relationship between the areas of country ‘owned’ by each man. With a combined work of this scale a tremendous amount of detail about the country is covered. What the painting ultimately reveals within or is determined by the knowledge and status of the viewer. Naming sites in it indicates presence of stories, relationships and events manifest at each place. Simon Hogan and Roy Underwood have painted Tjinning, with Roy depicting the female serpent, Minyma Wanampi associated with the Tjukurpa for this country. Simon explains that this ancestral woman travelled out of the Spinifex Lands to the ocean near Broome. Other rockholes in the vicinity noted by the two men are Paltju, Lingka, Mantapi, Pirapi, Tjanpinya, Itarinya, Kurkurnya and Wipurara.

Heading further north over sand dune country the other men have painted country associated with the Wati Kutjara Tjukurpa, Two Men, a father and son serpent beings. These two men covered a huge area in the northern portion of Spinifex country. Lawrence Pennington has focused on Mituna where the son makes camp. His father camps not far behind him. As they travel along in this fashion camping always with the son in front they head back to Pukara. These camping sites make the numerous rockholes here. At Mituna the Minyma Punpunpa, Fly Women make sweet bush food called pulparu (a paste made from ground seeds mixed with honey water) and offer it to the father. Winmati Roberts, Lawrence’s nephew has also depicted the sweet foods made available to the serpent men at Pukara, a site east of Mituna. Here the men feast on Kaliny-kalinypa and Ultukunpa (honey grevillea). Eating this food enhances the men’s spirit, kurunpa kunpu, making a potent energy available to the men. Winmati Roberts has drawn Yantji, the open grevillea flower surrounding the two snake men while Lennard Walker’s Yantji stretches across the canvas, its scale emphasizing the importance of this plant. This is Pukara a place of power and reverence whose significance reaches beyond the Spinifex Lands.

Ned Grant paints the sites of Walata and Piltitjara. Wati Kutjara is a primary spinifex story that passes across and gives meaning to a considerable portion of Spinifex country. In general terms the story involves a father water snake who is travelling with his son for initiation purposes. As the son is growing up and becoming more powerful people consider him dangerous and the father is in part trying to settle his son down through this transformative journey. They journey is indeed an epic journey that encompasses many elements.

Browse other works by Ned Grant

Browse other works by Simon Hogan

Browse other works by Lawrence Pennington