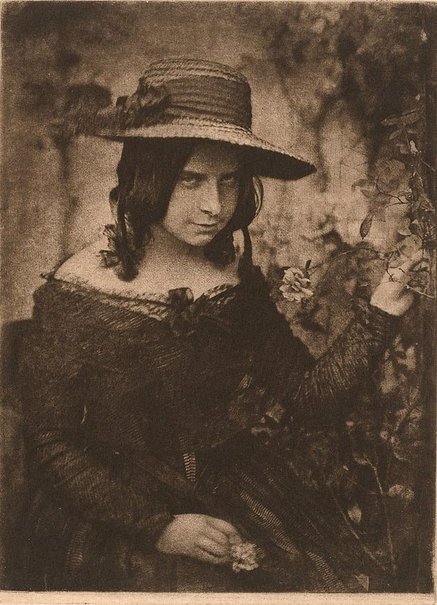 Hill and Adamson had a remarkable collaboration from 1843 to 1847. Adamson mastered the calotype photographic process and in 1843 established a portrait studio in Edinburgh, Scotland. There he met Hill, a painter, who sought Adamson out as an appropriate colleague. Hill wished to record, in painting, the Disruption of the Church of Scotland in 1843 when 450 ministers walked out of the General Assembly and formed the Free Church of Scotland.1 Hill and Adamson photographed 1500 individuals, groups and scenes in order that Hill could create his masterwork. In the course of their partnership they also photographed the fisherfolk of Newhaven near Edinburgh and took many other portraits of friends and family of which ‘Miss Mary McCandlish’ is one. Hill had become a member of the Edinburgh calotype club in 1840 and founded the Royal Scottish Academy in 1829 but is chiefly known for the thousands of calotypes which he produced with Adamson. Adamson died in 1848 and although Hill painted until the end of his life and attempted a collaboration with another photographer, the remarkable body of work he produced with Adamson was never bettered.

The array of types Hill and Adamson photographed were subsequently produced in book form and as photogravures. Four of these produced by J C Annan are in the collection of the AGNSW. ‘Camera Work’, the high-quality art journal published by Alfred Stieglitz between 1903 and 1917, also reproduced in photogravure three suites of Hill and Adamson portraits. Miss Mary McCandlish, beautifully dressed and sitting in an arbour of roses, is remarkable not least for her expression. Despite having to sit for the required exposure time, she does not appear stiffly posed as in most photographs of this period, but simply to have an unusual and interesting personality.

Browse other works by Robert Adamson