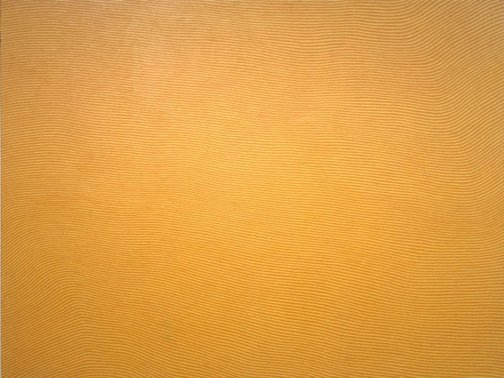 George Tjungurrayi is now one of the senior Papunya Tula artists and this painting is considered a definitive work in terms of its scale. The painting's colours glow like the desert sand. The realisation of the painting's subject matter is typical of the artist whose bold linear compositions evoke the marks made by the wind on the sandhills as well as the lines of sandhills themselves. Multi-layered representations of country such as this painting reflect central concerns of the Papunya Tula artists.
'Untitled' 2000, depicts designs associated with the travels of the Tingari men and women across the country. The small fleshy subshrub 'Tecticornia verrucosa' which produces the small black seeds known as mungilypa, or samphire, grows in abundance at the site. These seeds are ground into paste which is then cooked on the coals to form a type of damper. A large group of Tingari men gathered at the site to perform ceremonies. Since events associated with the Tingari cycle are of a secret nature no further detail was given.
George Tjungurrayi was born in the vicinity of Kiwirrkura c. 1945 and came in from the desert by way of Mount Doreen and Yuendumu. In 1962 he accompanied Jeremy Long on a patrol out west. He began painting at west Camp, Papunya in about 1976. He has painted at different locations since then, including Yayayi and Mount Liebig, and now at Walungurru. In recent times his development of a distinctive style based on optical stripes has brought his work to prominence.

Browse other works by George Tjungurrayi