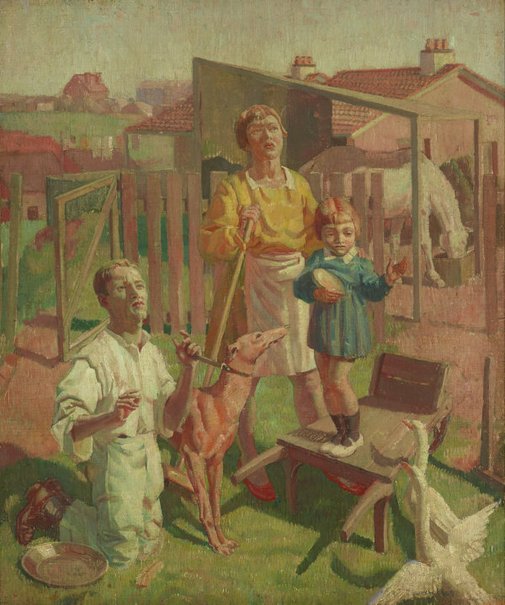 Of his time in Europe, during the years of his Travelling Art Scholarship from 1925, Murch stated that he explored painting “as if I were a pilgrim traversing the years”. Equally exhilarated by the great frescos of the Italian Primitives; the masterpieces of the Renaissance and the invigorating force of the modern masters, Murch returned to Sydney in 1927 reinterpreting the forms of artistic tradition and modernity within his own practice.

'The aeroplane' (1929) was painted in Murch’s grandfather’s Croydon backyard. Merging elements of the traditions Murch studied in Europe along with a feel for the American art of the New Deal of the Depression era, the work depicts a scene in a local backyard as an unseen aeroplane flies overhead. With its stylised posing of figures and backyard animals, the work is more of an allegorical composition; a metaphorical or symbolic rendering of an encounter between tradition and modernity. The stilled atmosphere and the mural-like qualities of the work invoke a sense of the monumentality of the changing world.

It is often children that are at the centre of the themes of Murch’s art. Here, the young girl is the only human figure who appears unperturbed. With her gesture and air of inward knowing, her figure is reminiscent of the Christ child of Renaissance painting. Placed in a suburban Australian scene, Murch paints her as a gatekeeper to the new world.

oil and egg tempera on canvas on board

Browse other works by Arthur Murch