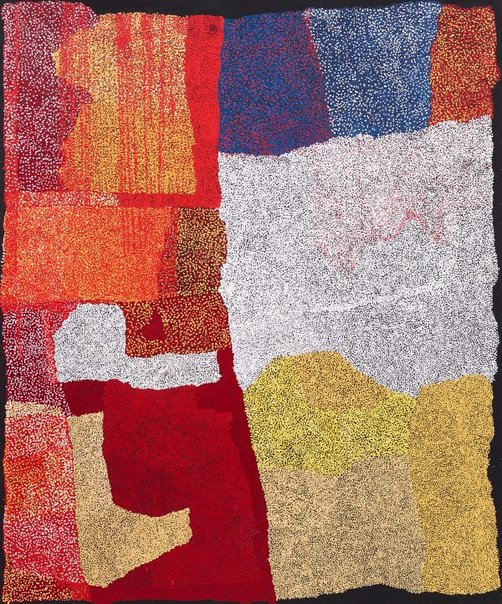 Patju Presley is senior elder within the Pitjantjatjara community of Tjuntjuntjara, Western Australia. He has an intimate knowledge of his country that has been acquired over countless generations of his family, which he transposes into abstract form in his celebratory paintings. Within each of these Preseley recalls his childhood experiences of travelling this country, following the Tjukurrpa trails and learning intricate details of the changing vegetation, water sources and weather conditions at particular locations.
‘Kali Impil’ 2015 draws attention to the site of the same name, which is connected to the Wati Kinara (Moon man), being the specific location where he and Wati Kuninka (Quoll man) spear each other numerous times resulting in the death of Wati Kininka. Layered with meaning the work references the geographical features of country that resulted from this encounter, the encounter itself and Preseley’s lived experiences of this landscape. These perspective of time and place are transposed in complex, colourful fields of dotted geometric forms with subtle shifts of colour and layers of colouration, to create a lively image of country that is just as much experiential as embedded in cultural knowledge.

The art centre has provided the following information for this work:
In this work Patju has painted a Kali Impil. This is a significant site to the east of Tjuntjuntjara, which Patju has cultural responsibility for Kali Impil forms part of the Wati Kinara Tjukurpa (the Moon Man Creation Line) and it is at this site where Wati Kinara (the Moon Man) and Wati Kuninka (the Quoll Man) spear each other multiple times resulting in the Wati Kuninka passing away. This is a small part of a much larger narrative involving the two men but this cannot be elaborated upon due to its sacred nature.

Browse other works by Patju Presley