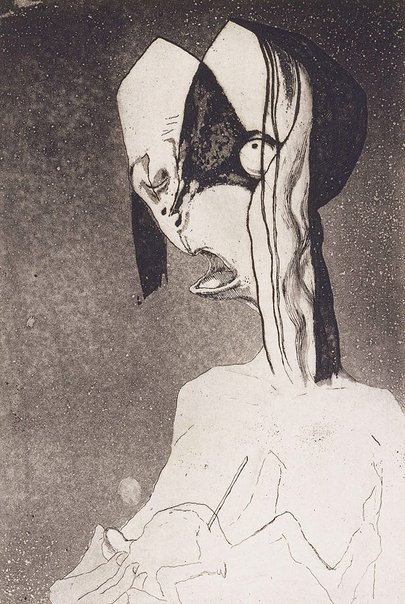 Among the postwar Japanese print artists, few share the distinct style and sentiment of Hamada's art. Hamada is unique among Japanese print artists in his graphic depictions of the grim realities of war and tragedy. He is probably best known for his series 'Elegy of raw recruits' which was based on his own experience as a soldier, and in which he bitterly exposed the inhuman aspects of the army. The series won the second prize at the Lugarno International Print Exhibition in 1956.

Hamada graduated from the oil painting course at the Tokyo School of Fine Arts. After WWII Hamada began to study etching under Komai Tetsuro and Sekino Jun'ichiro, two of the best known artists working in copperplate techniques. Unlike the works of his two teachers, which are usually serene, his works are disturbing, delving into the dark side of the human psyche and society. After completing the 'Elegy of raw recruits' series, he responded to the particular postwar political developments, namely the resurgence of nationalism and power in wrong hands. His more recent works depict the alienation of human beings from society which controls them.

Browse other works by Hamada Chimei