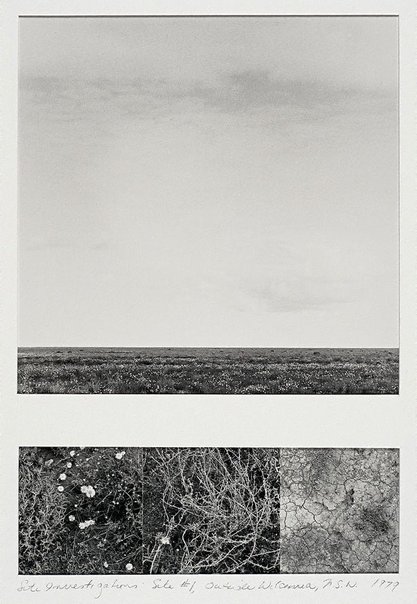 Lynn Silverman was educated in America and taught photography in Sydney from 1975-1981. She then taught in England and completed a Master of Fine Arts at Goldsmiths College, London before returning to America. While in Australia, Silverman completed two related series on the edge of the Australian desert, ‘Horizons’ and ‘Site investigations’. ‘Horizons’ is a series of diptychs where one image looks straight ahead at the horizon and the other looks down at the photographer’s feet. The subtlety of difference in sky and earth and the location of Silverman within this becomes highly contemplative. Like Marrison, Silverman was not interested in heroising the Australian landscape but presenting its effect on eye, body and mind. Meaghan Morris, in writing about this series, said: ‘I see Lynn Silverman’s photographs as a study in the construction of inland space: how space is made intelligible for us by a play of identity and difference; how cultural systems of interpreting a space can be unsettled by exhibiting the process of framing interpretations; and how landscape photographs induce a curious convergence between what you do when you set out to see the sights, and what you do when you look at an ordered sequence of images.’1

'Site investigations’ excludes Silverman’s feet and instead of an equal balance between the view straight ahead and the view to the ground the horizon is the greater with the view to the ground consisting of three separate images. The changes from one image to the next are substantial as the minutiae of the outback landscape reveals the teeming detail of the microcosmic.

Judy Annear, What is this thing called photography?, Sydney, 1999, (illus.). no catalogue numbers

Browse other works by Lynn Silverman