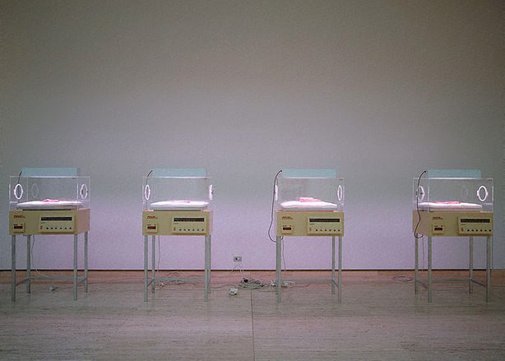 In the 1980s artists frequently took readymade, recognisable images then subtracted, added, multiplied and divided them, allowing photography’s power of appropriation to find a place for them in the art world. Maria Kozic, like Robyn Stacey and Juan Davila, drew on the imagery and industrial techniques of pop culture, quoted them and gave them back with an ironic twist. Kozic’s ‘Masterpieces’ 1986, for instance, cribbed famous works (such as Picasso’s, Mondrian’s or Warhol’s) and shattered them into fragments.

Mostly, however, Kozic has been drawn to what high art might see as being ‘in bad taste’: 1950s pulp romances, comic westerns, video ‘monster movies’, kitsch film posters. She also has had fun with kids’ toys, like those loose metal chains on boards that allow children to make changeable profiles (‘Magnetic heads’ 1985) or merchandising paraphernalia, such as The Patty Duke Game, or the creepy side of popular culture where terror, violence and humour are packaged along the same visual continuum – the rubbery members of the Gross Out Gang, for example.

Partly this comes from Kozic’s love of the cinematic and the mechanical effects that are mobilised in fairground ghost trains, but also from her interest in movement. In ‘The Brady bunch’ 1985 the faces on the lenticular screens change as you walk past them. In the installation ‘Nine carnivorous cats’ 1980, the cats change species from one side to another. These transformations imply an element of duplicity, like the granny and the wolf in Perrault’s ‘Little Red Riding Hood’. Additionally they’re about plugging into archetypal phobias these animals might evoke as they track back into the neurotic adult psyche. Kozic’s ‘Wolf pack (the lair)’, for example, confronted viewers at the 1991 Australian Perspecta exhibition from behind a wall. After hearing a snarling, bloodcurdling soundtrack, you peered down to see 13 papier-mâché wolves with reflector lights for eyes staring back at you.

Kozic’s ‘Pulse Mk2’ is an installation of four incubators in a row which Melbourne artist and 'Age' art critic Robert Rooney described in 1994 as ‘an exercise in minimalist Grand Guignol’ (Le Theatre du Grand Guignol was the original shock theatre of horror that took place in an abandoned chapel in Montmartre, Paris, in the 1890s). Though it appears motionless at first, the object in each unit (a gun, a bottle, a hand and a hammer) is seen to move – first it’s the bottle rolling from side to side, then the fingers of the severed hand start to have a life of their own, while the gun and hammer pulse and breathe. All the inanimate objects are fleshy (like the hand) and embossed with veins. Here a simple idea becomes a gripping piece of spooky theatre.

Browse other works by Maria Kozic