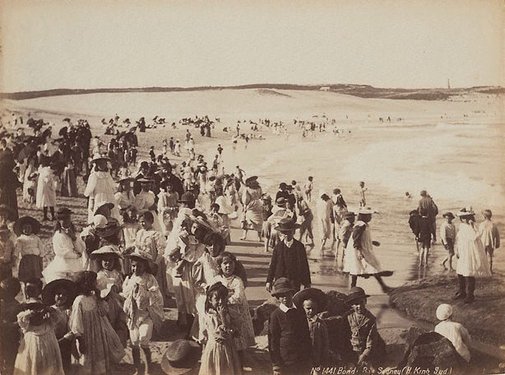 King’s success as a photographer eventually enabled him to build a large house in Bondi, with the beach a few streets away. Beach culture in the 19th century, however, was considerably different from today and the beach had not really established itself as an iconic part of the ‘Australian way of life’. Henry Burn’s ‘Brighton Beach’ 1862 is one of the earliest depictions of Australians by the sea. King probably took this charming photograph on the weekend, with the beach crowded. Yet the crowd is strolling and taking in the air, not swimming. A few have dared to take off their boots and paddle. The odd naked child ventures into the water. They probably escaped the daylight prohibition on bathing, which was in force in New South Wales until 1902.