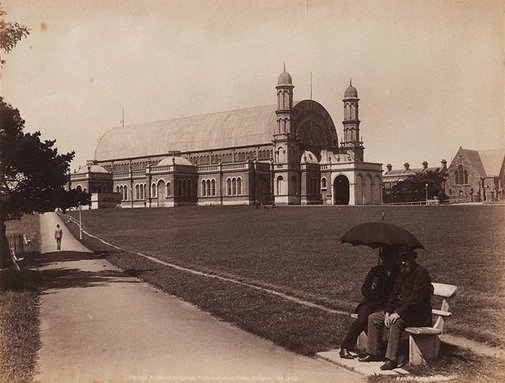 The Prince Alfred Exhibition Building, near Central Station in Sydney, was a popular entertainment venue used for agricultural shows, balls and musical concerts. For some time it was home to the Australian War Museum. It was demolished in 1954 to make way for a swimming pool. King’s photograph looks from the north-east towards the Exhibition Building, with Chalmers Street visible at the right. On one level this intriguing photograph might simply be a conventional record of an important civic venue. However, it has a quality quite unlike that of mere documentation. There is reason to suggest that King himself recognised this, as another version of the photograph exists, with the men in the foreground cut out. Is it fanciful to read this as an image of alienation? The Exhibition Building, ostensibly the subject, is reduced in this version by the two men sheltering from the fierce sun under a shared umbrella. It is they, and the small figure walking away from us under the sharp shadow of a few trees, who catch the eye. The denuded grass field reinforces the atmosphere of oppressive heat, which this photograph manages to capture so well. It seems to give visual form to the colonial song ‘Port Philip’:
Port Philip! Land of many wonders;
Land of light’ning; Land of thunders,
Land of various reptiles evil,
Land of heat would scorch the devil.