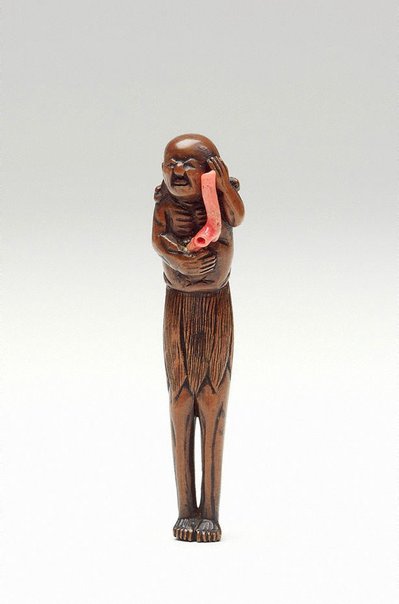 A netsuke is a small object attached by a cord to 'sagemono' (dangling objects) such as 'inrô' (men's medicine container) or tobacco pouch. The 'sagemono' was hung from the waist by its cord slipped under the 'obi' (sash worn around the waist), with the netsuke holding it in place. Due to this function, a netsuke has a bored hole, which distinguishes it from other non-functional carved objects.

Netsuke are made of different material such as wood, ivory, staghorn, metal and ceramics. Many netsuke have decorative as well as functional purposes, reflecting the owner's taste, beliefs or general fashion. Some netsuke carvers are well known for their outstanding skills, but there are also a large number of unsigned works that are as good as those by famous masters.

The subject of the netsuke varies from animals, plants, mythical creatures, gods and 'sennin' (mountain recluse) to foreigners or even erotica. Naturalistic representation of the subject is considered important, of course, but because of the intimate nature of netsuke, its tactile impression also plays a significant role in determining its value.