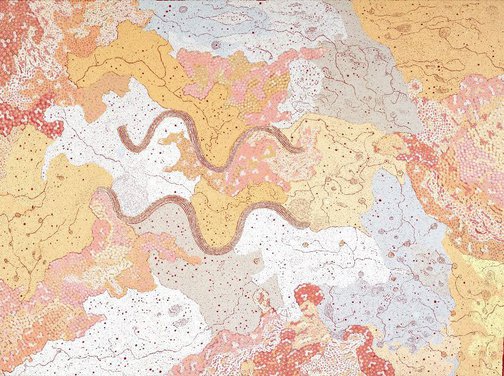 Tjampawa Stevens was born in the Western Desert at Areyonga in the Northern Territory around 1947. Areyonga is her father's country and her mother's place is Waltytjara. She came to Nyapari with her husband, Keith Stevens, and their five children to establish a community on their own lands.

Keith Stevens is a senior Pitjantjatjara man born in the far north of South Australia at Granite Downs station where his parents were working in the 1940's. Following in his parents' footsteps he was mustering at an early age and had no schooling until moving to Ernabella mission. Keith's family would travel for weekends to their traditional homelands of Piltati and Iwarrawarra. Keith's father eventually sat down with his family close to Piltati creek at what is now Nyapari Community.

Tjampawa and Keith Stevens have been painting with Tjungu Palya art centre since it stated in 2006. Tjungu Palya is based in Nypari community, which is located at the base of the Mann Ranges in the Pitjantjatjara lands of far north-west South Australia. Both artists paint individually and have achieved success under their own names. However, in recent times they have combined forces to create amazing paintings that offer complex representations of country that have captured attention.

'Piltati' 2014 is a significant work by Tjampawa and Keith Stevens, celebrating their unique vision of country. The work referes to Keith Steven's homelands of Pilatati, centred on the community of Nyapari where they live. The work encompasses many stories, centred on this location, particularly the travel and actions of two snake men across this terrain. Two sisters generously provided food to share with their brother. However, the brothers were selfish and did not reciprocate. Tired of providing for the brothers, the sisters agreed to share nothing, angering the men who took the form of huge water serpents to scare them. Unaware that the brothers were kin, the sisters speared one of the serpents. Writhing in pain, the serpents lunged forward and consumed the sisters. Within the work the serpents are present as the centrally located, sinuous linear forms embedded within densely applied topographies of country.

Browse other works by Keith Stevens