Richard and the world 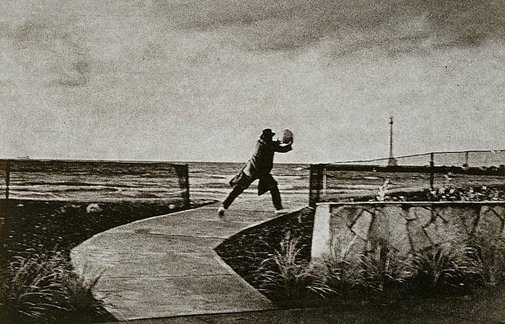 Robert Ashton's work is typical of the highly personalised documentary photographs that began to emerge in the 1970s. While his primary aim was to record life as he found it, his images disclose unusual conjunctions and reflect an idiosyncratic vision, hinting at what lies beneath the surface.

Photographic processes are an important part of Ashton's practice. For instance, he explored photogravure, a printing process akin to etching, for three years. Highly prized in the late 19th and early 20th centuries for its fine finish and velvety image, photogravure is a difficult and expensive process rarely used today. However, its capacity to imbue images with a particular and subtle light has been used by Ashton to transform simple subject matter. This is evident in ‘Richard and the world’ in which the manipulation of subject and the particular printing technique create a sense of ominous drama within what at first appears to be a humorous pursuit.

‘Two dogs’ 1982 (AGNSW collection), an example of Ashton’s gelatin silver work, while different in process, is similar in vision and effect. The exiting canine in ‘Two dogs’ also echoes the transition between two separate spaces that occurs in ‘Richard and the world’. Caught as they move between the visible present into the unknown space just beyond, with their expression hidden as they move away from the camera, the impetus that propels these protagonists is insinuated but undisclosed. The lingering ambiguity of what has transpired creates a wake of intrigue and amusement. While photography draws attention to a subject, the challenge, Ashton has said, is that, ‘it must go further than that, it must also isolate the moment which will best communicate the essence of a subject (to others) so that they may see again in a different light that which they have passed over or missed.’ 1

Robert Ashton
Richard and the world

Browse other works by Robert Ashton