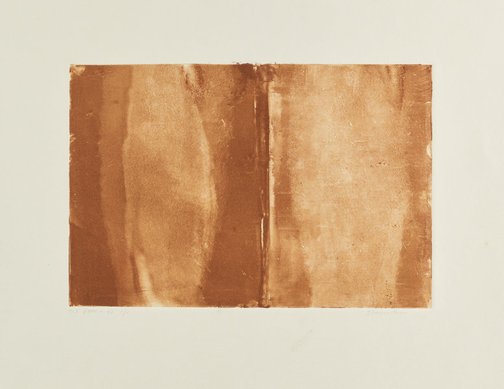 Staunton used the monotype method to create this haunting suite of prints as a direct and deeply personal response to the September 11 attacks on the World Trade Centre in New York in 2001.
Executed on already-inked plates the artist had been preparing for another body of work, the ghostly imprints were made by the artist’s hand and arm pressing into the viscous pigment. The plates were then printed into a single edition.

Throughout the series, two rectangular blocks - possibly representing the twin towers - repeat on each sheet hued by dark purple, red, ochre and black inks. These blocks of colour are interrupted by the ghostly imprints of the artist’s hand trailing down the plate, recalling the shocking media imagery of victims who fell and jumped from the towers, to their deaths.

These monotypes exist in a darker area of the artist’s practice, referencing mortality and the fragility of human existance. The artist continued making monotypes through the mid-2000s, expanding her subject matter (such as still life), and experimenting with strategies of representation, before making a wholehearted return to figurative painting.

Browse other works by Madonna Staunton 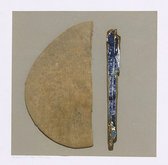 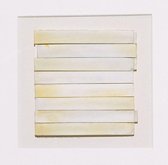