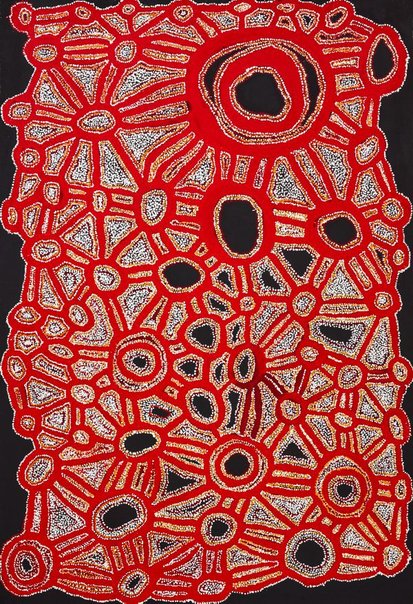 Fred Grant is among the Spinifex people whose lives were disturbed by the atomic testing at Maralinga between 1956 and 1963, the effects of which continue to be felt. Born at Ukatjatjara, he now resides at Tjuntjuntjara with his wife and fellow artist, Carlene West. In addition to his painting practice, as an individual artist and in leading the collaborative works created by the men in the community, Grant is an exceptional singer, having taken part in the musical drama “The Career highlights of the Mamu’ 2003-4, which portrayed the history of the Spinifex people from the time of the Maralinga tests to their return to country, which travelled to the Hamburg Summer Festival of Arts in Germany in 2003.
Grant’s artworks are locally specific, although they give the impression of covering vast areas of country, due to the number of individual locations referenced. Such is Grant’s knowledge of particular locations that he is able to provide complex details of each location, as is evident in his major painting ‘Kulpitjara’ 2014. Kulpitjara comprises three main waterholes, the site of Pirilyi where the Seven sisters danced and sang and the rockhole of Makuratjara where the Golden bandicoot man passed away. These interconnected locations are embedded within a complex web of country, emblazoned on the canvas in brilliant reds and white set against a deep black ground. Variations in the scale of particular locations and the use of extensive white infill contrasted with a seemingly random scattering of black voids, intensifies the visual aspects of this works ensuring it captures the dynamics of country.
The art centre provided the following information for this work:
Ka nyangatja kapi piti mankurpa ini Kulpitjara Ilkurka munkara ka kapi piti kutjupa ini Pirilyi ka panya nyangatja minyma tjutaku ngura ka palaru tjana inma inkanyi ka kapi kutjupa ini Makuratjara ka ngura panya kuka nyulu nyinanyi ka Wati Nyulu wiyaringu ka kapi kutjupa kai tjukurla tjuta.

This painting is showing the three main waterholes for Kulpitjara that is up past Ilkurlka. Other sites of significance shown here are Pirilyi which is a site for the Seven Sisters story and where all those women were dancing and singing. Also shown here is the rockhole named Makuratjara and it is the site of the Golden Bandicoot Man where he passed away.

Purchased with funds provided by the Aboriginal Collection Benefactors' Group 2016

Browse other works by Fred Grant