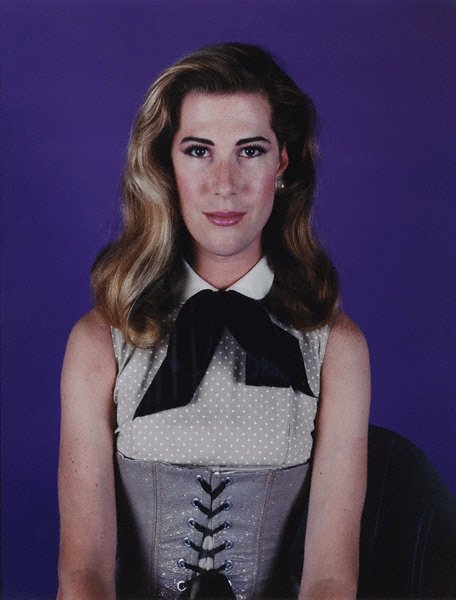 Catherine Opie graduated MFA from CalArts in 1988, she has been teaching at UCLA since 2001. Opie came to notice in the 1990s with her photography of transgendered people and Los Angeles subcultures. She has recently photographed surfers along the California coast (these were featured in the 2004 Whitney Biennial) as well as the South Central/West Adams area of Los Angeles where she now lives, completed a photo-essay on Chicago, and a portrait series on children. Her exhibition history since the mid 1990s has been extensive throughout Europe, Japan and the US, and she is also an extremely prolific artist producing 19 series in the last 12 years.

Opie’s photography is many ways is an extended and ongoing self portrait, from herself in a variety of roles to the people she knows well through to the environments they variously inhabit, and onto the travels she takes into the interior of the US or along the coast. ‘Justin Bond’ is from the ‘family’ Opie knew best in the mid 1990s and is part of the ‘Portrait’ series that catapulted her to fame. Opie usually works small scale and ‘Justin Bond’ is typical of much of her portrait work – flat background, half length, formal pose, careful presentation from corset to collar to hair and makeup – nothing is out of place.

This is an iconic Opie photograph of the period which is revealing of two of her most important influences for portraiture – August Sander and Hans Holbein.

Browse other works by Catherine Opie