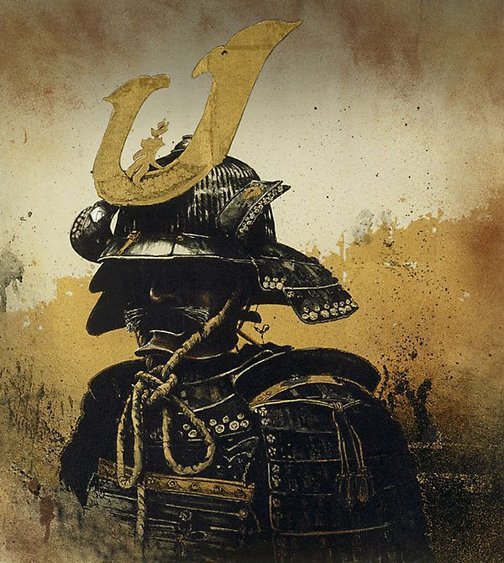 The title of this print, 'Busho', means warlord, and the image of traditional armour and helmet evokes the samurai heroes of Japan's mediaeval past. Samurai legend and mythology are deeply ingrained in the national consciousness of Japan. The samurai have been romanticised and idealised, and their legendary acts of heroism are known to every schoolchild. Renowned for their bravery and stoicism, the samurai lived by a most exacting code of behaviour, known as 'Bushido' (the Way of the Warrior), in which the highest value was placed on loyalty to their lord. Those found guilty of disloyalty were expected to commit 'seppuku' or ritual suicide. The legends and ethos of the samurai live on in plays, television dramas and the films of Akira Kurosawa ('The Seven Samurai', 'Throne of Book', 'Kagemusha').

Williams was born in Lima, Peru, and now lives in Shiga Prefecture. For him 'bonsai' is a sort of ghost or echo from Japan's martial past - an image that is quaint and somewhat sinister at the same time. He believes a knowledge of a society's past is essential to the understanding of its present and future, and hence has depicted this image of a vague memory dimly gleaming in the half light of the past.