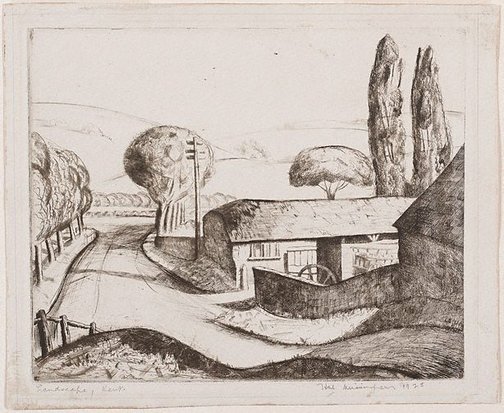 Hal Missingham had a distinguished career as a painter, printmaker, photographer, designer and gallery director, including
as director of the AGNSW from 1947–71. His first art training was in printmaking, when he was apprenticed to a firm of process engravers in Perth in the early 1920s, but he soon felt the urge to leave his native city and in 1926 went to London where he spent the next fifteen years, travelling, studying and working as an artist and teacher.

“Landscape, Kent” was Missingham’s first and only drypoint. He made it after studying etching under W P Robins at the Central School of Art and Design in London, where he also undertook classes in lithography, book illustration, wood engraving, poster design, typography, life drawing and painting.