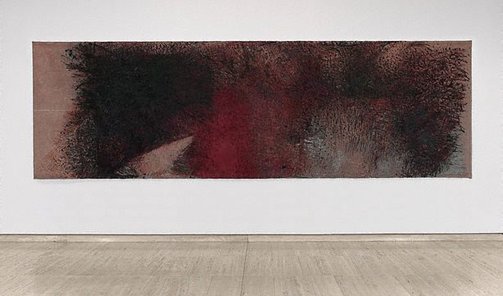 For Brian Blanchflower, spirit and matter combined describe an enigmatic paradigm and provide the premise for a career that has spanned more than four decades. His densely layered paintings of nature, showing activities in the cosmos and on earth, evoke a space beyond their material dimension. Such concerns find their genesis in the topographies of England and Australia, both of which have deeply influenced Blanchflower’s work. He grew up and studied in London during the 1960s. Like other British artists of the same generation, Blanchflower spent some time walking through Wales and England, specifically the southwest, where prehistoric sites such as Stonehenge had a significant impact. Notably, such sites symbolise ancient endeavours to understand the nature of humanity within the universe. When Blanchflower arrived in Australia in 1972, settling in Perth, the subject of his paintings shifted from the skies to the immensity of the Australian landscape, although he remained concerned by the ability of art to realise a spirit of place or being in material form. He encountered this with Aboriginal culture and its powerful traditions of image-making wherein land, culture, custodianship and spirit are inextricable from the form of their art.

In 1983 Blanchflower spent a year in London, and it was here that he painted ‘London stone/ southern heat’. The title is a culmination of past and present concerns: from the English megaliths that captured his early fascination to the Australian environment, particularly the intensity of the sun and weather. Indeed the painting grapples with the inherent polarities of nature including the bleak blue light of English winter and the arresting red heat of an Australian summer. In ‘London stone/southern heat’, red, blue and black marks spread out across the surface of a large hanging flax canvas, creating an abstract view of an undulating landscape. There is energy in Blanchflower’s technique, suggested by the coarse thickness of paint on the canvas, the repeated gestures that both recede and deepen, and the layering of pigments which visually swell the material surface. The viewer is drawn into the textures and space created by this work, as it pictorially maps out a rhythm of time passing – marks, gestures and colour metaphorically charting the passage of the heavens or the earth.

Browse other works by Brian Blanchflower