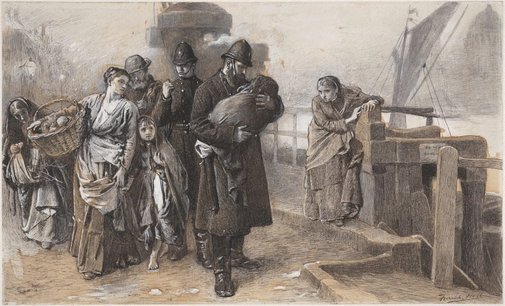 The scene is dawn by the River Thames with the dome of St Paul's Cathedral looming in the background. Two policemen ending their beat along the London docks encounter an abandoned baby, the child we are invited to imagine of the cowering woman with a shifty expression on the right. According to the artist's daughter, Ada Reynolds, Holl witnessed the event while walking around the East End:

… when my father and Mr Johnson met the little procession headed by a stalwart policeman carrying the baby, followed by a sympathetic murmuring crowd, it struck my father that a good thing might be made of it. In the drawing he gives an additional interest in the figure of a woman half veiled … who leans forward eagerly to gaze at the little bundle in
the policeman’s arms, and in whose attitude is undoubtedly to be found the motive of the story, since it is very obviously the mother of the child, who is loath to let the last sight of her baby pass from her without a struggle, and is evidently torn between a longing to reclaim it and the misery which forced her to abandon it.

Like Dickens, Holl wandered around London’s poor districts at night in search of material. He wanted to confront his audience with scenes they may have read about in novels but had never seen. As his daughter recounted in her 1912 biography of the artist:

It was scarcely a morbid attraction for the seamy side which led him forth upon these unsavoury peregrinations, but rather, I take it, a latent idea that, by depicting them forcibly and poignantly, in his own work, he might bring home to the indifferent eyes and hearts of the public the wretched and iniquitous state of affairs which lies close to our own doors.

Holl was one of the leading social realists of the 1870s, together with Luke Fildes and Hubert von Herkomer. These artists provided documentary illustrations for the weekly news magazine The Graphic, first published in 1869 and committed to addressing social problems and showing the poverty and misery of the Victorian underclasses. Holl worked for The Graphic from 1871 to 1878. Commercial engravers transferred his drawings to woodblock, a medium especially suited to printing in densely hatched black and white. The wood engravings were admired and collected by no less a figure than Vincent van Gogh, who wrote to a correspondent in 1883: ‘When I was looking them over, all my memories of London ten years ago came back to me – when I saw them for the first time; they moved me so deeply that I have been thinking about them ever since, for instance Holl’s The foundling …’

The composition was reproduced as a double-page illustration in The Graphic on 26 April 1873. As was customary practice, Holl used his drawings as the basis for oil paintings shown at the Royal Academy, however the canvas (exhibited in 1874) remains untraced. Holl achieved considerable success as a painter of social realist subjects but later turned to the much more lucrative trade of portraiture and was beset by commissions from the great and the good. He became sufficiently wealthy to have Norman Shaw build him a studio house in Hampstead and a country house in Surrey.

This drawing is one of a number of original Graphic illustrations purchased by the Gallery at the Sydney International Exhibition in 1879, where the London Graphic Company exhibited a collection of works by its artists.

Browse other works by Frank Holl