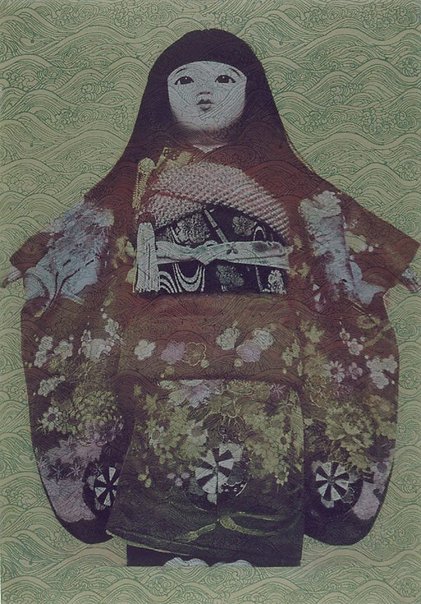 Dolls still play an integral role in Japanese society. Apart from appearing annually in homes all over Japan for the Doll Festival ('Hina Matsuri') for girls on the 3rd March (see acc.no. 430.1993) and the Boy's Festival ('Tango no Sekku') on the 5th May, dolls are also made as artistic expressions of unique regional styles. Hence much lavish care is expended on dolls and their costumes, so they can be admired and enjoyed visually.

In this print Sakurai has used a photograph of a doll representing a girl, and has depicted her fully clothed in a beautiful traditional kimono decorated with wheels, water motifs and cherry blossoms (a symbol of spring). He has further refined this image by placing a veil of stylised wave decoration across the whole surface, and titling the work 'ga' which means elegance, artistry or taste. There is a hint of the fetish in the fastidious care applied to this image. By applying modern techniques to classic subjects, he uses his print as an affirmation of the continuity of traditional Japanese customs, textiles and design.

Sakurai was born in Wakayama Prefecture, and now lives in Kyoto, the traditional cultural centre of Japan and a city whose conservative values would be more in tune with the artist's own promotion of traditions.