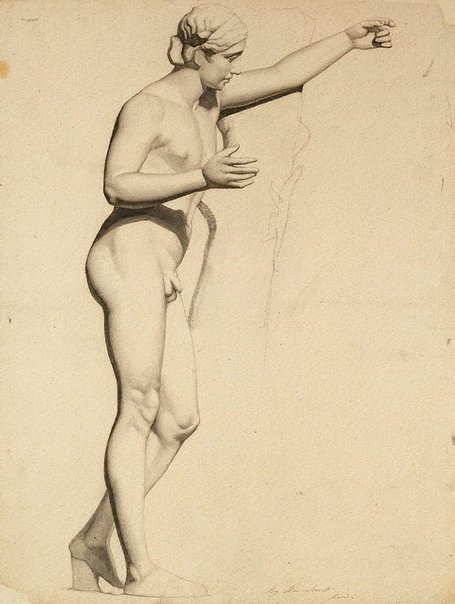 William Strutt was the first classically-trained British artist to pursue a career in Australia, where he worked between 1850 and 1862. He is celebrated for his dramatic history paintings and monumental depictions of colonial life.

According to the artist’s grand-daughter, he made this drawing when he was about thirteen. Strutt and his brother Joseph became pupils of the academic painter Michel-Martin Drolling (1786-1851) in Paris in 1838 and as part of their training drew from engravings, antique casts and life models. Apart from enrolling at the Ecole des Beaux-Arts in 1839, where he received instruction from Paul Delaroche and Horace Vernet, Strutt remained with Drolling until 1843. He then took up an apprenticeship to Joseph-Nicolas Jouy 1843-44. This drawing may therefore have been made as late as 1843, when Strutt was 18 years of age. The drawing is of a Roman copy in marble of Apollo with a lizard, after the original Greek sculpture by Praxiteles c350BC, now in the Louvre, Paris.