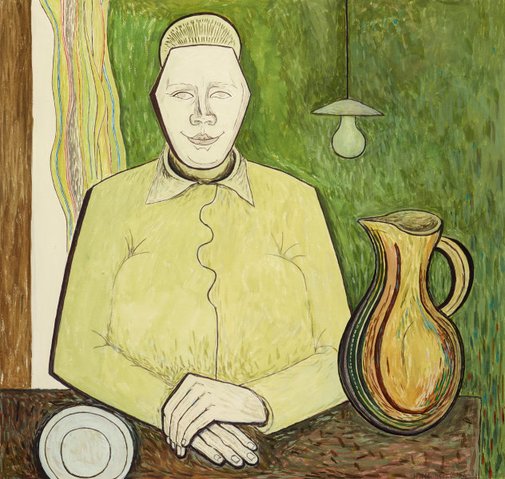 Helen Maudsley is best known for her complex paintings and drawings that are reflections on human relationships and the surrounding world. They are deeply autobiographical pictorial puzzles of intricate personal symbols and motifs constructed into geometric labyrinthine-like compositions.

There are distinct phases in Maudsley’s artistic career. Until 1967 she worked predominantly in gouache, watercolour and ink due to space and time constraints caused by a lack of personal studio in her home whilst raising four young daughters. In 1967 her husband, the artist John Brack moved into a purpose-built studio and Helen inherited his old studio in their house. It was around this time that Maudsley returned to working in oil paint, which she had not used since her student days. Maudsley has continued to make her detailed geometric paintings in oil since then, building them up first with drawings in pencil.

Maudsley’s early works are quite figurative and visually different to her mature geometric oil paintings. This early work on paper is a striking portrait of Barbara Blackman (poet and wife/muse to Charles Blackman) and others of her contemporaries including Joy Hester. This work is typical of Maudsley’s early surrealist inspired style.

Browse other works by Helen Maudsley