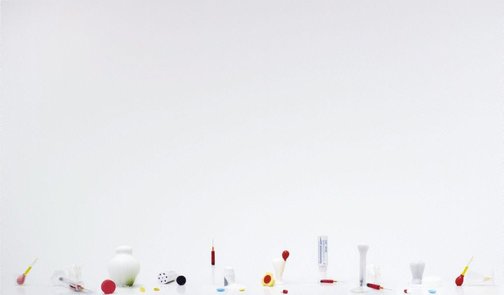 Born in 1969, Australian artist Brett East graduated from the College of Fine Art, University of NSW, with a Bachelor of Fine Art in 1997.

East has exhibited in Sydney, Melbourne, Newcastle, Beijing and Glasgow and works across various media, including photography, painting, drawing, and digital. His work often explores junctions between different mediums and the resulting hybrid form.

Andrew Frost, ‘Australian art collector’ [Issue 41, Jul-Sep 2007] writes that East’s ‘common thread is a questioning of the status of the image – be it painted, photographed or installed – and the complex critical negotiations between different types of image-making.’ Speaking of the ‘Vanitas’ series, Frost suggests East is ‘an artist with a very sly sense of humour’ as he plays with an audience’s perception of colour (often primary), questioning prescribed responses to the seemingly mundane, and equally prescribed, drugs he depicts.

According to Sebastian Smee, ‘The Australian’ 17 May 2007, ‘East sees his images as a secular updating of the Dutch tradition of the ‘vanitas’, a kind of symbol-laden still-life reflecting on mortality. And, East ‘wants to give a sense that everything in his images is artificially created, even the negative space behind the carefully arranged objects.’ Although wanting to create a ‘plastic look’, East has a particular interest in the emotional effects a colour can have upon a viewer, he tells Smee that although they are subjective, ‘colours do have useful meanings, we weren’t given eyes to see colour for no reason at all.’