Jesus the good shepherd, from the series The New Testament as understood by small children 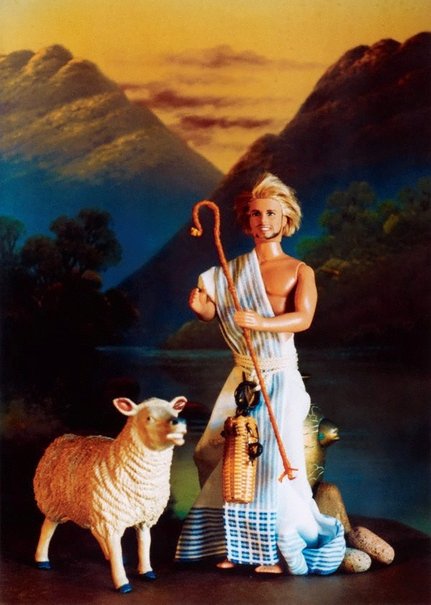 Born in Sydney in 1969, Elaine Campaner completed a Bachelor of Visual Arts (Hons.) at Sydney College of the Arts, University of Sydney in 1999. She has exhibited extensively since graduating. Her work is in the collections of the National Gallery of Australia, Canberra, University of Sydney Union, and the Art Gallery of New South Wales, among others.

For ‘The New Testament as understood by small children’ series, Campaner costumed and posed Barbie dolls as characters from bible stories, such as in ‘Jesus the good shepherd’ and ‘John the Baptist’, juxtaposing Christian icons with Mattel’s infamous doll, a symbol both of childhood and consumer-culture. Thus, the inclusion of bible verses as sub-titles to the primary titles is telling, as can be seen in that of ‘Jesus the good shepherd: “The Lord is my shepherd; I shall not want.” Psalm 23 v1’.

Campaner plays with contrasting notions of the world. Her other works reveal this in their consideration of perspective, the way everyday objects are abstracted to create humorous yet unsettling, familiar yet foreign images. Whether tourists admiring the view through a souvenir spoon (‘The lookout (the Three Sisters, Katoomba)’), a man wandering through a winter forest extrapolated from a coffee mug (‘The winter of our discontent’), or a lonely boat in a plastic bag landscape (‘Fiordland’); there is a constant probing apparent. Simultaneously channelling grand landscapes and quaint still-lifes, they seem to beg ‘what is the world?’ The ‘sacred’, majestic and revered or the ‘profane’, mundane, and material?

Browse other works by Elaine Campaner