Figure of the Buddha seated on a high ornate base, with his right hand in the earth-touching gesture ('bhumisparsha mudra') 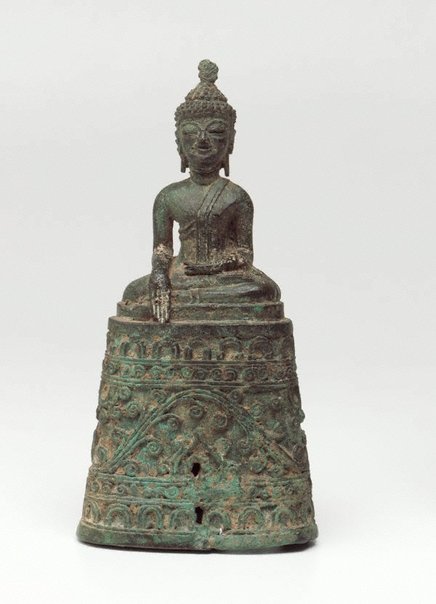 This Lao image combines unusual and common features. In particular, the squashed facial features of the image, with its lumpy nose, arched eyebrows meeting above the nose, thin eyes, and the slightly smiling slit mouth above a pointy chin are all regular features of Lao Buddha images. The stepped head, covered with large hair curls is also typical. The knot of hair on top of the Buddha’s head, however, is less common, and usually, the 'ushnisha' (the cranial bump) is topped by a flame shape. This may be reminiscent of the headdresses of early images that originated in India, which were popular in Burma, a kingdom that had a strong presence in northern Southeast Asia and controlled Laos briefly during the sixteenth century. The exaggeratedly high pedestal base is typical of the seats that Lao Buddhas sit upon. While the relief decoration here is reminiscent of that found on some Southeast Asian lacquered wood and also resembles patterning on Lao textiles, it is not a decoration often used on the thrones of Buddha images.

Figure of the Buddha seated on a high ornate base, with his right hand in the earth-touching gesture ('bhumisparsha mudra')