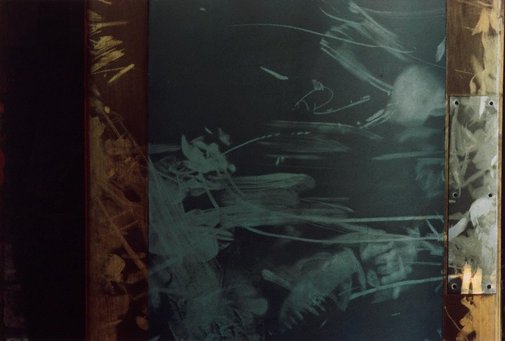 “[For] two and a half years I was associated with the El Nogal Club, as Cultural Director. A few days after the [terrorist] attempt of 7 February 2003, as I was in charge of the artistic patrimony of the institution, I had to go into the premises to verify the state of the patrimony. What I saw and felt as I walked by will forever remain in my memory. As I carried out the task, I knew that I had to record and keep a memory of what I kept seeing around me.

Up to that moment the building had been isolated by the authorities. Everything was as had been left after the impact, as if time had stopped. There was total darkness - because of the collapse of electricity - and a veil of soot - caused by the fire - covered the walls and objects.

This work, 'From the inside', is born from that experience. It intends to in a different way approach what happened. Using a record of prints found on the surfaces and daily objects - doors, walls, the stairs - it intends to capture the atmosphere of what was lived there during those hours.

Most of the photographs were taken a few days after 7 February 2003. Others were taken later when the rubble was being removed. The video was also made at that moment.” Maria Elvira Escallón, http://mariaelviraescallon.org/

Maria Elvira Escallón
From the inside #3