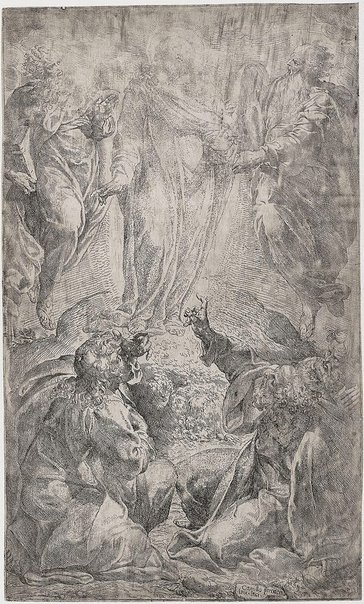 Procaccini belongs to a family of artists originating from Bologna. Along with his younger brothers, Carlantonio and Giulio Cesare, Camillo Procaccini received some training from his father Ercole before heading to Rome to further his artistic studies. On his return to Bologna in the early 1580s he worked on a number of important commissions for fresco decorations and altarpieces. He also travelled to Parma to study Correggio’s work, whose influence he temporarily assimilated.

A contemporary of the Carracci, Procaccini was one of the dominant painters in Bologna during Annibale Carracci’s youth. However, with the establishment of the Carracci and their art academy, Procaccini moved to Milan with his father and the rest of the family. Here he headed an influential school, established his reputation and worked more or less continually until his death.

It was during his early Milanese years that Procaccini worked as a printmaker, but although he was a prolific painter and draughtsman, he appears to have produced no more than half-a-dozen etchings, all of which treat religious themes. The Transfiguration, his largest and most famous, is generally thought to date between his arrival in Milan in 1587 and 1590. It is signed ‘Percacino’, the Bolognese spelling of his name.

The print, in fact, repeats the composition of Procaccini’s altarpiece – known to have been painted by 1590 – for the church of San Fedele in Milan. Perhaps it was made both as a demonstration of the artist’s abilities as a printmaker and as an advertisement of his capabilities as a designer of altarpieces. Interestingly, the subject was recast yet a third time in 1595 when Procaccini was commissioned to paint the organ shutters in Milan Cathedral, now introducing into the Transfiguration a fourth apostle, shown kneeling on the ground. When closed, the organ shows the Triumph of David; opened it displays the Resurrection and Transfiguration.

The episode of the Transfiguration is recounted in Matthew’s Gospel (17:2) when the apostles Peter, John and James witness Christ, ‘transfigured before them: and His face did shine as the sun, and His raiment was white as light’. The prophets Moses and Elijah also appeared and talked with Jesus during this profoundly mystical event. Then, hearing the voice of God, the disciples fell down from fear. When they looked up the vision had vanished and Jesus rejoined them, forbidding any mention of what the disciples had seen. The Transfiguration marked the culmination of the public life of Jesus and was viewed as a prefiguration of the Resurrection.

Procaccini drew the figure of Christ with short stippled marks, remarkably unlike the heavier, continuous outlines and cross-hatchings used to describe the other figures in the print. The resultant paleness suggests mystical radiance and the inner shining of Christ’s divinity; it confers an incorporeal, almost hallucinatory, quality to the representation of this most miraculous occurrence.

Sue Welsh Reed and Richard Wallace, Italian etchers of the Renaissance and Baroque Cleveland Museum of Art, Cleveland and National Gallery of Art, Washington, 1989, 1989, pp 74-75. no 34