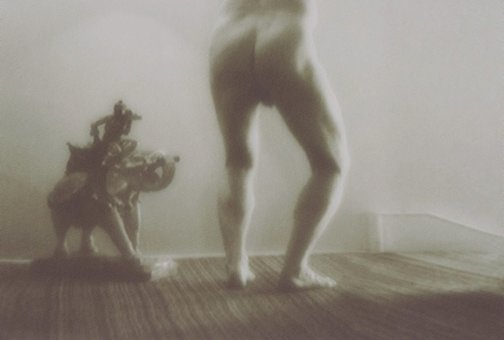 Pat Brassington graduated Bachelor of Visual Art, Tasmanian College of Advanced Education, and Master of Fine Art from the University of Tasmania. Working within a surrealist aesthetic, she is one of Australia’s leading photo media artists. Since the mid-1980s, her images have continually flirted with psychoanalytic theory, without ever committing to it.

Resolutely uninterpretable, Edward Colless has said of Brassington’s work that ‘To decode the patterns of correspondences as if they were symbolic would [be] like trying to psychoanalyse the window of a tumble dryer’ [Marsh, A. ‘Pat Brassington’, Quintus Hobart 2006, p 21]. Brassington revels in horror, inverting the textured surfaces and tonal effects of her figures, until flesh and muscle become landscape. As circus master to a tirade of uncanny, truncated human resemblances, she highlights the humour in her medium.

‘In marble halls’ is unusual amongst Brassington’s oeuvre for its use of the male figure. In an earlier series, '1+1=3', 1984, Brassington used a similarly seductive soft male form to explore private domesticity. The figures of ‘In marble halls’, differ however, in that they appear more ghostly – as these figures shift between the boundaries of light and shade, the perimeters of flesh are lost. The sometimes veiled figures of ‘In marble halls’ destabilise gender relations, inciting desire, revulsion and hilarity simultaneously. In image no 4, Brassington transforms her figure’s buttocks into the likeness of an erect penis, disarming and amusing her viewer. Like any good clown, with each image, the figure of ‘In marble halls’ looses some dignity. By sexualising the abject, Brassington has sent her viewer down what she calls the ‘slippery slide’ of the grotesque gaze.

Browse other works by Pat Brassington