Small tea bowl with design of landscape and poem 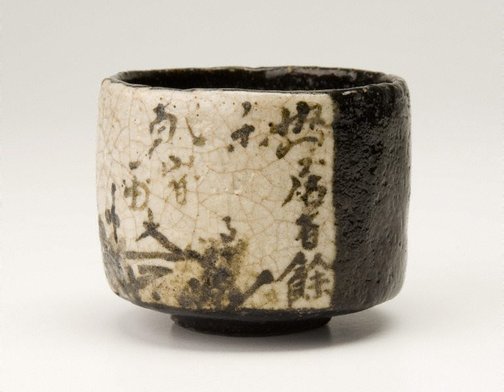 Born as the third son of a family of wealthy merchants, and younger brother of Ogata Kôrin, the famous painter/designer, Kenzan studied ceramics under Nonomiya Ninsei, arguably the most respected potter in Japan. Kenzan, however, did not follow or imitate Ninsei but created an original style often working together with his brother Kôrin in what came to be called the Rinpa style. While Ninsei exploited the three-dimensional surface of the ceramic piece in decorating his work, Kenzan treated the whole shape as a single pictorial space - incorporating the interior and exterior of a bowl.

The inscription on this tea bowl is from a larger poem by the Song poet Dai Fugu. It reads:

Dai Fugu (1167－?), cognomen Shizhi and sobriquet Shiping, is a poet of the Southern Song dynasty. Born in Huangyan, present-day Zhejiang Province, Dai is a celebrated member of the Jianghu school of poets, and he is said to have spent over twenty years travelling and visiting famous scenic spots. His works is collected in the ‘Shiping shi ji’ and the ‘Shiping ci’.

The poem below (from which the couplet comes) collected in the ‘Shiping shi ji’, is one of Dai's ‘Shanzhong jimu er shou’. This is a ‘wuyan lushi ‘or Five-character Eight-line Regulated Poem.

Signed on side after inscription, in Japanese, iron underglaze, '[Kenzan shô]' and kaô (kakihan) '[ji]'.