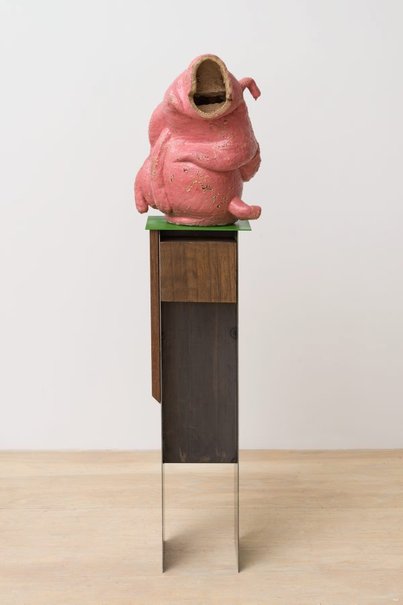 Arlene Shechet is an American sculptor whose practice reflects a profound understanding of the temporal and material qualities of the ceramic medium. Loose, irreverent and awkward without compromising structure or strength, her sculptures have a weighty objecthood while also suggesting living things. Having exhibited widely throughout the United States since the 1990s, Shechet received widespread acclaim in the 2010s for her solo exhibitions at the ICA, Boston (2015) and The Frick Collection, New York (2016), which asserted her ability to redefine the creative and critical possibilities of the decorative arts within a contemporary art context. Her ceramic sculptures are as much about what is on the inside as what is on the outside and, indeed, they reveal what happens when traditions and expectations are turned inside out.

A conflation of bulges and appendages, hollows and openings, 'Beginning now' flirts openly with the unorthodox. This bodily form, which sits atop its own pedestal of steel and wood, does away with standards of perfection, revelling instead in the provocative and the grotesque. From its irritated surface – which cracks and crinkles, bubbles and peels -- to its fleshy folds and swollen orifices, 'Beginning now' moves between figuration and abstraction in a manner that surprises and challenges.