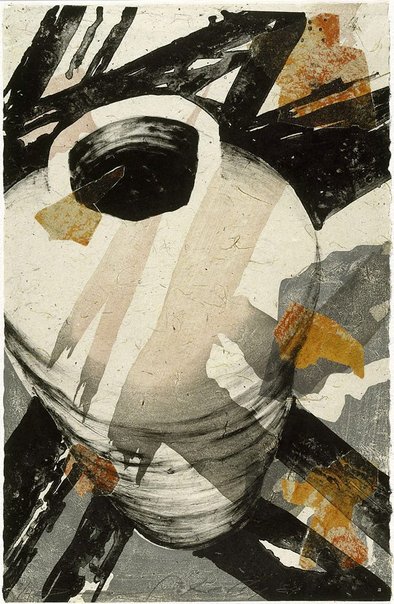 Kelly was born in Idaho in the USA and received his training at the Tokuriki Atelier in Kyoto where he still lives. This particular print is a rich mix of gesture, texture and tradition.

Shigaraki is one of the most famous of the Japanese ceramics, particularly the typical large, unglazed red-orange stoneware jars. The history of the Shigaraki kilns, situated to the east of Kyoto, dates back some 700 years when the kilns produced items such as seed storage jars for local farmers and burial jars for the local Buddhist temples. Shigaraki ware became famous when tea masters started using them in the tea ceremony from the sixteenth century. Through the influence of the tea aesthetic, they were admired for their unpretentiousness, their simplicity and honesty of form, and the textures and colours of their surfaces. The shape of Shigaraki pieces is uneven as the pieces are formed by the ancient technique of coiling and smoothing; the surface is rough and patterned with the flecks of white quartz peculiar to Shigaraki clay.