Footprint of the Buddha 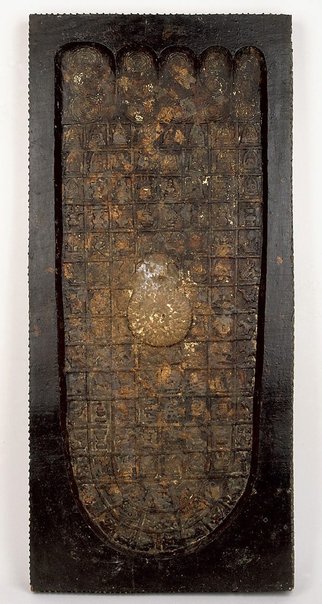 According to Pali legend, the sole of the Buddha's foot was marked with 108 auspicious signs, the most prominent of which was the Wheel of the Doctrine. Legend asserts that during one of the Buddha's miraculous visits to Sri Lanka, he stamped an impression of his foot on the summit of a mountain. The site of this footprint has become a great pilgrimage site for Buddhists and reproductions were made and installed throughout Southeast Asia for the benefit of worshippers who could not make the pilgrimage to Sri Lanka. This footprint is one such copy, albeit a relatively recent one, yet attesting to the importance of this legend even in contemporary Buddhist practice. While the wheel mark at the centre of the footprint is clear it is a little difficult to make out the detail of all the other symbols. They include, however, buddhas and bodhisattvas in various postures and auspicious motifs including the stupa and the 'kalasha' (overflowing pot). It is believed that to worship one of these footprints brings the same benefits as worshipping the Buddha himself.

Footprint of the Buddha