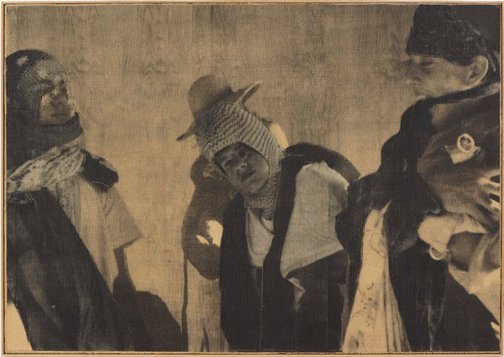 In David Noonan’s large screen printed collages, boys or young men in unusual, perhaps theatrical, costumes gather together. The images are eerie – we do not know why they are dressed like this or what the relationship between the men is – and they have a haunting and uncanny quality that is familiar from half-remembered dreams. The men form a tableau whose narrative we can almost grasp but which slips away from making sense as if our subconscious has woken up and can no longer order our thoughts and images into a coherent whole.

The images are found, from magazines from the 1970s, but this does not help explain what the young men are doing together and what they are doing here with us. They seem to rehearse a scene, perhaps from an amateur theatre production or a science fiction film, which calls for an excessive piling up of fabric and costumes. The layering of jute and linen gives a physicality to Noonan’s work which echoes the layering of costumes in the images. The artist has worked the material, gluing and lifting sections to create a push and pull tension that reflects what is happening in the picture.

There is also something threatening about these images, a ‘Lord of the Flies’ quality in which these kids with their costumes and rituals could be living by their own rules, a world in which we have no part. The desire to disguise and to role play is a way in which identity can be tried on and tested out, in which selfhood can slip away to be replaced with a new sense of being. Teenagers are wont to try on different selves before settling on how they will be in the adult world, but in these haunting and impressive images we can never be quite sure just whose world this is.