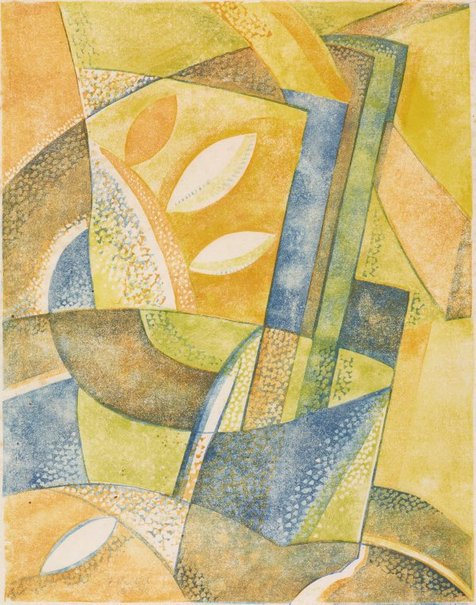 Frank Weitzel was born in New Zealand to a politically radical, German family who emigrated to San Francisco in 1921 when he was sixteen years old. In 1923 he won a scholarship that allowed him to spend three years studying at the California School of Fine Arts, San Francisco, the Art Students League, New York (1926) and the Munich Academy in Germany (1927). He settled in Sydney in 1928 and quickly gained a reputation with the local avant garde for his sculpture, linocuts and textile and furniture design.

Described as “…perhaps Sydney’s most significant modernist sculptor” (Deborah Edwards, ‘Sydney moderns’ Art Gallery of New South Wales, 2013, p.164), Weitzel’s short time in Sydney nonetheless had a disproportionate influence on the development of local modernism. Shortly after arriving here he took a studio near Circular Quay, making a number of strongly graphic linocuts of urban Sydney subjects such as the Harbour Bridge, inner city streets and slums. He is thought to have shared a studio with Roland Wakelin (exhibiting a portrait sculpture of him in 1929), showed with the Society of Artists (1928-31), the Contemporary Group and in the inaugural Group of Seven exhibition at Macquarie Galleries in 1930. He designed a ‘Man’s study’ room for the 1929 Burdekin House exhibition, and was ‘warmly supported’ by Dorrit Black who possibly introduced him to colour linocut artist Claude Flight, holding a memorial exhibition of Weitzel’s work at her Modern Art Centre, Sydney in June 1933.

By 1930 he was living in Britain, exhibiting with Claude Flight and other leading modernists including Jacob Epstein, Duncan Grant, and Paul and John Nash. He received critical attention from Roger Fry and was associated with the Bloomsbury set, including writer David Garnett. Weitzel’s untimely death cut short a promising career that had already produced exceptional work and a small but significant legacy for Australian modernism.

Weitzel was a cosmopolitan and eclectic artist, capturing the modern spirit of the world in his art and design, international interests and outlook. The influences on his work were extensive – from Art Deco and Bauhaus, through primitivism and modernism, German expressionism and the colour linocuts of Claude Flight and the Grosvenor school.

Weitzel’s prints featured in two exhibitions organised by Flight at the Redfern Gallery in 1930 and 1931 and it was Flight’s influence that led Weitzel to extend his printmaking practice into multiple-block colour printing. This print was made in Britain and reveals strong futurist and cubist influences; Flight wrote to Dorrit Black on 11 June 1930; “I am very pleased to have Mr Weitzel’s work for the show. I like it very much, it is original, strong, good of its kind & just the sort of work we want.” (quoted in Stephen Coppel ‘Claude Flight and his followers, the colour linocut movement between the wars’ Australian National Gallery, 1992, p. 17).

Purchased with funds provided by the Australian Collection Benefactors Program 2015

Bonhams Australia, Bonhams Australia: Important Australian and international art including private collections curated by John Cruthers, Tuesday 16 June 2015, Sydney, Sydney, Jun 2015, 108 (colour illus.), 109. Image for AGNSW work is lot no. 60 on pg. 109. Text that applies to this work is text for lot no. 61 on pg.108. The images have been incorrectly titled by Bonhams.

Lora Urbanelli, The Grosvenor School: British linocuts between the wars, Providence, 1988, 78 (illus.). Cat. no. 59 'Abstact design no.2' (another impression).

Browse other works by Frank Weitzel 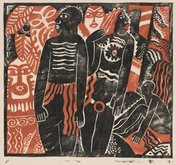 Frank WeitzelFigures in a classical landscape8.1973