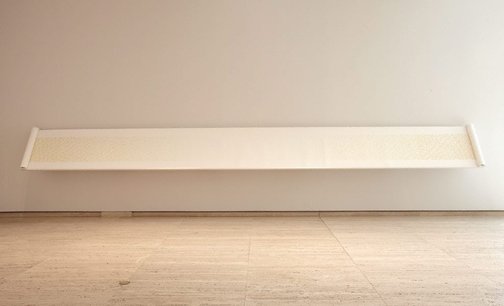 Hossein Valamanesh’s art has a sense of poetic wonder, in which natural materials and references to cultural history and personal memory intertwine as a metaphor for human experience. An engagement with a sense of place informs much of his practice, but one which is as much about metaphysics as observable fact. Valamanesh was born in Iran in 1949 and grew up in the remote town of Khash near the Pakistan border and later trained as an artist in Tehran before immigrating to Australia in 1973. His work often draws on the Australian landscape as well as on Iranian culture, in particular Iranian poetry and the Sufi mystical tradition.

‘Middle path’ 2008 appears deceptively simple in its material form and yet is of great beauty and enduring emotional expression. An almost eight metre long paper scroll is unwound along the gallery wall. Hand written on the scroll in Farsi script is the word ‘love’ repeated over and over by the artist in an act of concentration and dedication. The sense of an ancient tradition suggested by the form of the scroll and the Persian text is reinforced by the material Valamanesh has used for his mark making; the script is entirely written in saffron. Derived from the crocus flower, saffron has been grown and used for thousands of years in Iran which remains the world’s largest producer of this spice.

The word love is written boldly and strongly at the beginning of the scroll and yet towards the centre it becomes less present, gently fading away until just a trace of luminous text remains. In a mirroring of the first part of the scroll, it subsequently gradually remerges as strongly as it began. ‘Middle path’ was included in an exhibition entitled ‘No love lost’, but rather than meaning a lack of love or conflict, this title refers to not losing love, to not letting any love go, to the importance of retaining love both personally but also in public and political realms. The fading text suggests the elusive nature of love and how it can disappear, but with care and attention it remerges as strongly as it was before, a cyclical and continuous process that is part of the human condition. A further layer is added to the already rich references in this work by the choice of a title from Buddha’s teachings which advocate choosing a spiritual path that lies between extremes.

Browse other works by Hossein Valamanesh