Le Guay began his photographic career in 1935 as an assistant at Dayne Portrait Studios. He established his own studio in Martin Place in 1938 and became a member of the Sydney Camera Circle and the Contemporary Camera Groupe. Le Guay has paid tribute to Harold Cazneaux for enthusing him about photography in the 1930s and continuing to do so until the latter's death.

Le Guay served as a war photographer in World War II and in 1946 re-established a studio in Sydney. In 1949 he founded 'Contemporary Photography', the first Australian photographic magazine not published by a photographic supply firm. Le Guay was known for his innovative early work where he used double exposures and montage in sophisticated surrealist inspired images; he went on to become a highly creative fashion photographer; and a fine documentary photographer. As an editor and writer he was tireless in promoting photography. He worked for many magazines including 'Picture Post', 'Harper's Bazaar', 'Vogue', 'National Geographic' as well as publishing his own books. 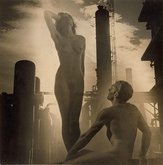