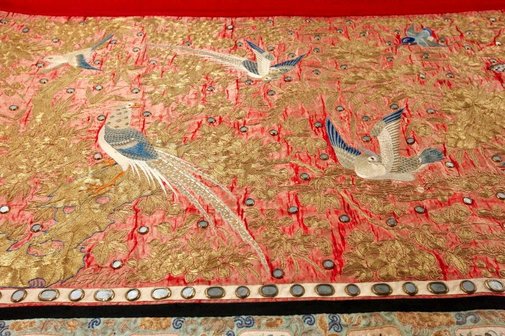 This textile demonstrates the level of skill and artistry attained by Perankan embroiders in the 19th century. Peranakan culture was a fusion of the local Malay culture and that of the Chinese who primarily came to trade in Malacca beginning in the 15th century. Through the years further influences also came from other cultures including India, Portugal and the United Kingdom. This valance would have been the horizontal part of a traditional wedding bed canopy. Intricately embroidered with silk and gilt thread, it is patterned with colourful birds and butterflies. The decoration is auspicious, as is the original red background.