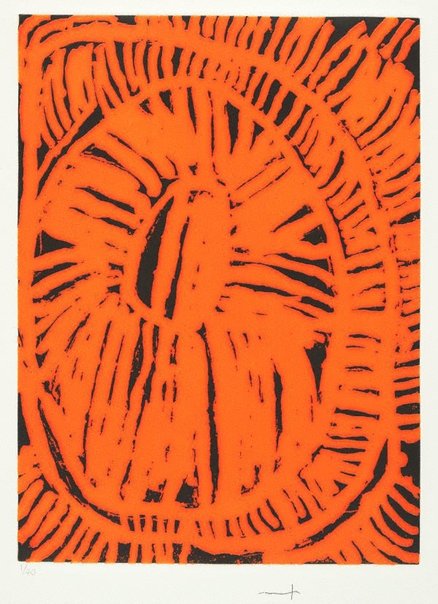 This etching depicts designs associated with the rockhole and soakage water site of Marrapinti, west of the Pollock Hills in Western Australia. The tali (sandhills) and puli (rocky outcrops) surrounding Marrapinti are represented by the lines in the etching. In ancestral times a large group of senior women travelled from Marrapinti to the rockhole site of Ngaminya in the east. While at Marrapinti the women made the nose bones, also know as marrapinti, which are worn through a hole made in the nose web. These nose bones were originally used by both men and women but are now only inserted by the older generation on ceremonial occasions. As the women continued their travels east they gathered the edible berries known as kampurarrpa or desert raisin from the small shrub Solanum centrale. These berries can be eaten straight from the bush but are sometimes ground into a paste and cooked in the coals to form a type of damper.