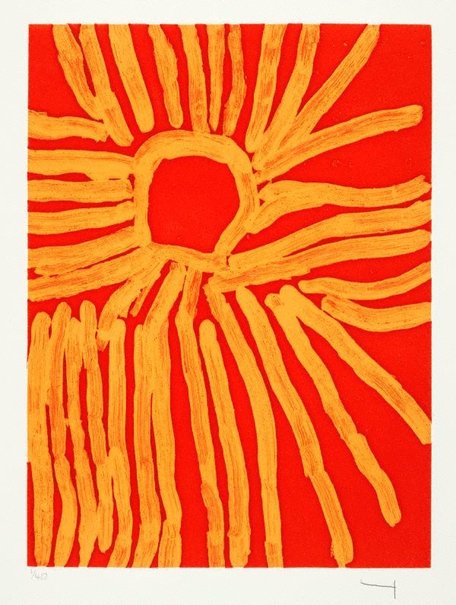 This etching depicts designs associated with the soakage water site of Unkunya, west of the Pollock Hills in Western Australia. The Two Snake Dreaming passed through this site after travelling from far in the east. The soakages at the site, represented by the large roundel, were said to have been formed by the snakes at the point where they burrowed underground. The lines outside the roundel depict the tali (sandhills) surrounding Unkunya. During ancestral times many women travelled through this site from the west on their way to Marrapinti. At Marrapinti the women made nose bones, also known as marrapinti, which are worn through a hole in the nose-web. These nose bones were originally worn by both men and women but are now only worn by the older generation on ceremonial occasions. The women later travelled east passing through Ngaminya and Wirrulnga collecting the edible berries known as kampurarrpa or desert raisin from the small shrub Solanum centrale which grow in the area.