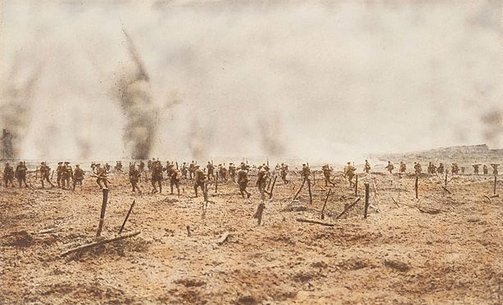 James Francis (Frank) Hurley was born and educated in Sydney. He became interested in photography and in 1905 he joined Harry Cave in the postcard business and began to earn a reputation for the quality of his work and the risks he would take to secure sensational images. In 1911 Douglas Mawson invited Hurley to be the official photographer on the Australasian Antarctic Expedition where he shot both still and moving images (which he screened in Australia in 1913 as the film 'Home of the Blizzard'). In 1914, after trips to Java and the Northern Territory, Hurley joined the ill-fated Shackleton expedition to the Antarctic and produced some his most famous images. In 1917 he completed his second Antarctic film, 'In the grip of polar ice'. Later in 1917 Hurley went to France and Belgium as official photographer for the Australian Imperial Force and thence to Palestine. He exhibited his war photographs to great acclaim in London and Australia blowing some up to mural size.

Hurley's career continued to break new ground in both film and still photography - 'Pearls and Savages' 1921 remains an exceptional if controversial film of Papuan life. Hurley was an adventurer and an eccentric whose restless spirit led him to record the extraordinary in whatever part of the world he visited.

Browse other works by Frank Hurley