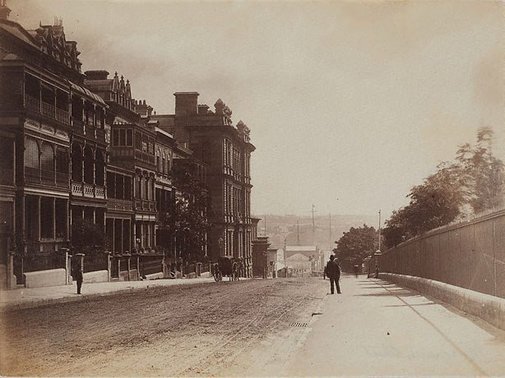 John Paine was born in England and arrived in New South Wales in the 1860s. After a period working as a photographer in regional New South Wales, he established a Sydney studio in 1875, advertising views of the city and the Blue Mountains. He was awarded a silver medal at the Sydney International Exhibition in 1879 and later exhibited at colonial and international exhibitions in Amsterdam (1883), Calcutta (1885) and London (1886). In 1884 he travelled with Augustine Dyer, head of the photo-mechanical branch of the NSW Government Printing Office, to record the establishment of the British protectorate over south-east New Guinea. The trip resulted in the lavish publication ‘Narrative of the expedition of the Australian Squadron to the south-east coast of New Guinea’ 1885, described as the most significant work in the genre of 19th-century Australian photographically illustrated books.1

Only two buildings remain today from those shown in this photograph of Macquarie Street looking down towards Circular Quay: the Colonial Secretary’s Office, which is the large sandstone structure on the corner, and History House, shown second from the left. Paine took hundreds of similar views during his working life as a photographer. In 1875 the ‘Sydney Morning Herald’ announced the sale of ‘500 views of the City, Harbour, Botanic Gardens and Public Buildings of Sydney’ by John Paine, along with views of the Blue Mountains and regional New South Wales. While a commonplace subject, this photograph demonstrates Paine’s skill in composition and in capturing atmosphere.

Browse other works by John Paine