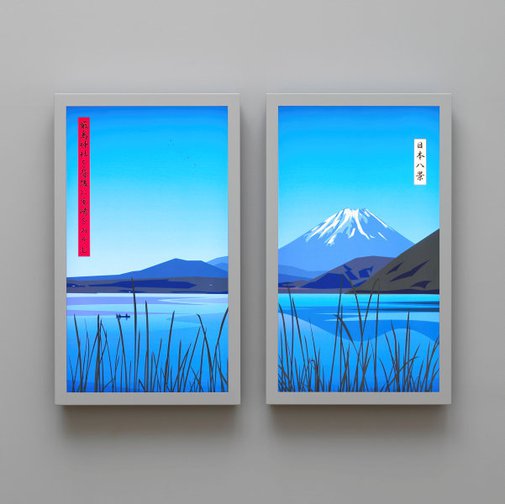 London-based artist Julian Opie graduated from Goldsmith’s School of Art in 1982 where he studied under the influential sculptor and painter Michael Craig-Martin, whose computer-generated work ‘Deconstructing Piero’ 2005 in the Gallery’s collection provides a noteworthy parallel to Opie’s own interest in digital simulation. Associated to the New British Sculpture movement, Opie came to the fore during the mid-1980s and has since exhibited regularly in the UK and abroad. He has had major solo exhibitions at the National Portrait Gallery, London (2011), Neues Museum, Germany (2003) and Institute of Contemporary Arts, London (1985), amongst others, and has also exhibited at the Shanghai Biennale (2006), 11th Biennial of Sydney (1998) and documenta 8 (1987).

Opie is renowned for his sculptures and paintings that, in emptying their subjects of any defining qualities, are an essentialised pairing of lithe black outlines and flat surface colour. His intensely simplified imagery — from landscapes and portraits to large abstracted forms and architectural structures — is much informed by the movements of Minimalism and Pop, yet, his work is undeniably of the present. Superficial, impersonal and detached, but nonetheless seductive, it offers a striking translation of a most contemporary way of seeing and interacting with our everyday world. In ‘View of boats on lake Motosu below Mount Fuji from route 709’ Opie engages with the tradition of Japanese woodblock prints to bring his distilled style and contemporary sensibility to a classic landscape scene of Mt Fuji. The work possesses a strong mediative quality with its flawless blue sky, mountainous horizon and subtly swaying reeds (the work is animated).

Gift of Geoff Ainsworth AM 2016. Donated through the Australian Government's Cultural Gifts Program