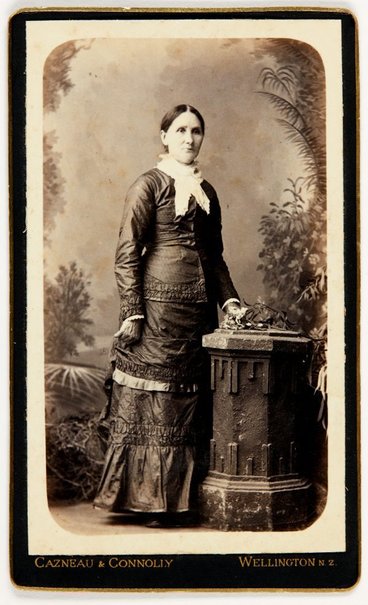 This portrait from the New Zealand studio of Cazneau & Connolly of an unknown woman against a painted backdrop is an exceptional example of a carte de visite. A photographic calling-card, cartes de visite were widely circulated from 1860 to the 1890s and marked a decisive turn in the development of the medium. Cheaper to operate and capable of multiple reproductions, carte de visite technology allowed more people to engage with the medium. While they were later superseded by the larger cabinet card, cartes de visite were incredibly popular and produced by the millions world-wide. Distributed amongst social acquaintances, cartes de visite were often kept in personal albums.

The woman in this portrait stands next to a short column and in front of a painted backdrop that dives the illusion of a landscape scene. Her pose, with one hand resting on the top of the column and with her body at an oblique angle to the camera, is near identical to those found in countless other carte de visite portraits. As the practice of commercial photography accelerated, with itinerant photographers circulating across the country, and more people had their photographs taken, the way figures were presented to the camera assumed a uniformity. A set of stock poses emerged that were replicated endlessly, regardless of geographic location. The way composition and posture are echoed across disparate photographs is a forceful demonstration of how the photographic medium began to infiltrate everyday life during the nineteenth century.

The studio of Cazneau & Connolly who produced this carte constituted an important link between Australian and New Zealand photographic practice. Pierce Mott Cazneau, co-founder of the studio alongside James Bennett Connolly, was the father of eminent Australian Pictorialist photographer Harold Cazneaux (who added the ‘x’ to his family’s French name as an adult) and practised commercial photography in both New Zealand and Australia.