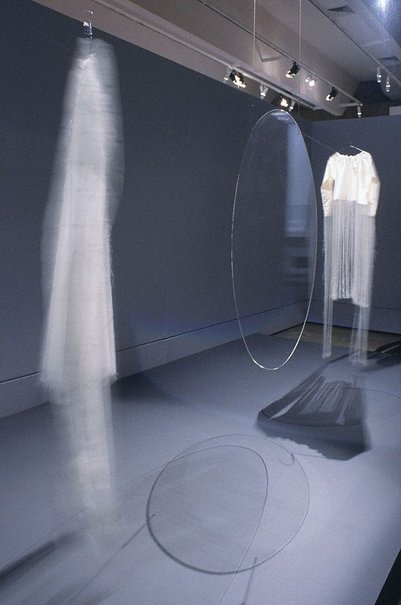 The title, 'La Somnambule', translates as the sleepwalker, suggesting something of the dreamlike half-waking, half-sleeping, affect of this work. Two suspended items of clothing hover at a distance from each other, with a circle of Perspex hung in between. One piece of clothing has all its lower threads unraveled, hanging down in a softly falling fringe as the fabric comes apart. The other textile more closely suggests the 19th century night dress on which both are modelled, but again with elongated sleeves and this time sewn all over with eye hooks. Each piece seems intimately connected to the other, though their exact connection is not made clear. The hooks suggest that they may catch the unraveled silk threads of the other; equally the delicate threads may become snagged in the hooks. The suspended sheet of Perspex increases the sense of distance between the pieces while also suggesting a mirroring, of one piece reflecting the other.

The monochromatic aesthetic of this work and the careful arrangement of the components embody the formal qualities that lie beneath the fragile beauty of much of Piggott's work. In turn, this formalism is often related back to the human body, to the trace of material presence that our body leaves in the world even when that bodily form is absent. Piggott has used clothing items in previous works, as well as creating other works that capture an even more ephemeral human trace such as glass vials that contain breath.

'La Somnambule' is from a related series of works made from clothing items that grew from Piggott's experience of living in Paris in 1994 and 1995. These works trace a passage through space that is at times more literally cartographic, such as the mapping of Paris that occurs in the work 'Constructing Paris' 1996-97, or which are a more poetic experience of place and distance, such as the work 'Conversation' 1995, which refers to both Piggott's view of Camille Claudel's studio from her own studio window in Paris, but also the experience of communicating from Paris to her partner in Melbourne. All these works share a suggestion of connections and intimacy, of distance and the need to articulate experience, and of a dream-like residue of human desire and emotion.

Browse other works by Rosslynd Piggott