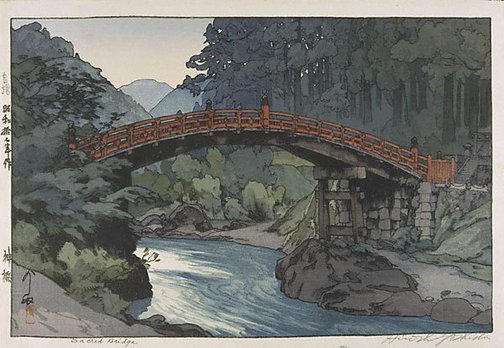 Yoshida Hiroshi is one of the best-known modern Japanese printmakers. He studied oil painting in the 'older' of the two schools of Western-style painting around the turn of the century in Japan. His two passions in life - travel and art - led him to landscape painting. His early experience in selling watercolour landscape paintings for American tourists triggered him to travel to America and Europe from 1899 to 1901, and again for 1903 to 1906. After the Great Kanto Earthquake in 1923 he was invited to America by Charles Freer. He continued to travel around the world - including Asia, South America and Africa - throughout his life, producing prints of the local impressions.

When Wantanabe Shôzaburô began in the 1920s to publish prints by contemporary artists as what is now known as New Prints, Yoshida provided landscape designs for him from 1921. Yoshida also produced many prints by himself. Those prints are indicated as 'printed by the artist ('ji-zuri')' or 'blockcut and printed by the artist ('ji-koku; ji-zurii')'.

Browse other works by Yoshida Hiroshi