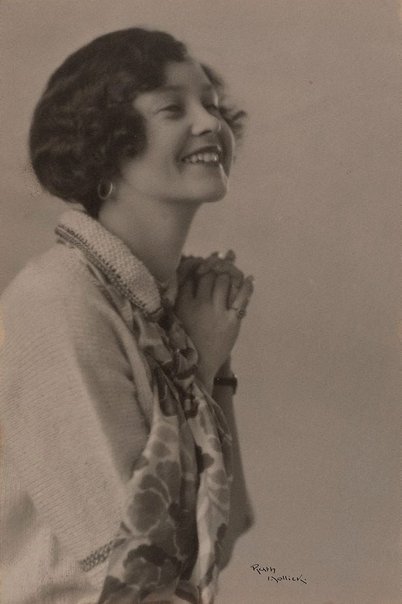 Ruth Hollick trained at the National Gallery Art School in Melbourne before taking over Mina Moore’s Melbourne studio in 1918. She excelled at child and society portraiture and was the Melbourne equivalent of Harold Cazneaux with much of her work published in the illustrated magazines of the day, including 'The Home'. 1

This three-quarter profile studio portrait has the spontaneity of the period and of Hollick’s work. With the subject posed against a plain background, this photograph has the softness of pictorialism combined with the light tones and dynamism of modernism. The young woman, Miss Jocelyn Purves Smith, sister of painter Peter, is caught laughing, with her head raised and her hands clasped in an expression of joy and engagement with something outside the picture frame. The flowing scarf adds to the sense of life within the image while the flat right-hand third of the image and the elegant signature of the photographer below acknowledges a debt to an orientalist aesthetic. The photograph was published in ‘The Home’ in September 1924 on a page of Hollick’s portraits of debutantes.

The shift from the stiff and formal poses of the 19th and early 20th centuries is complete. The faster camera equipment and film, and the influence of modern thinking and modern design, enabled the subject to be portrayed in an increasing variety of ways. Hollick was particularly good at engaging her subjects and capturing a sense of their essence as much as their likeness. Hollick was clearly enterprising, working not only in the studio but also as a touring photographer travelling through Victorian towns early in her career. After closing her studio in the early 1930s she continued to operate from home where she worked until the 1950s. 2