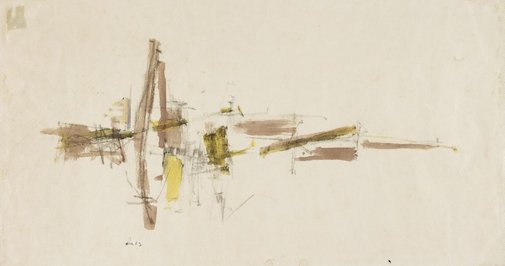 William Rose is one of a select few Australian post-war artists whose work suggests the modern technological world. The structural basis of his work initially grew out of the industrial/port environment in which he grew up in Newcastle, as a recent survey exhibition of his work at the Newcastle Region Art Gallery revealed.

Together with his contemporary John Olsen, Rose was a driving force in the seminal 'Direction 1' exhibition at Macquarie Galleries in Sydney in 1956, which brought him, Olsen, Robert Klippel, Eric Smith and John Passmore to public prominence. As a result his work was included in many important exhibitions and publications of Australian art in the late 1950s, 60s & 70s.

Rose gradually left industrial Newcastle (and early references to international abstraction) behind as he evolved a personal language that is largely concerned with spatial arrangement, evocative of sound or the intricately constructed internal workings of fine machinery such as computers.

A painter with a deliberately limited and sharply accented palette, there is primarily a graphic succinctness and energy to all of his work, so it is not surprising that he was an obsessive and highly skilled draughtsman. In fact the drawings are never secondary, despite their size or seeming modesty.

Gift of the Estate of William Rose 2011

Browse other works by William Rose